The Society of Jesus was founded by St. Ignatius of Loyola in 1540. The Jesuits have a historic and dramatic past. Following the lead of Ignatius and Francis Xavier the Jesuits impacted the world with the gospel of Jesus Christ. Today with their checkered present it is important to remember the faith and valor of the Jesuit forefathers. 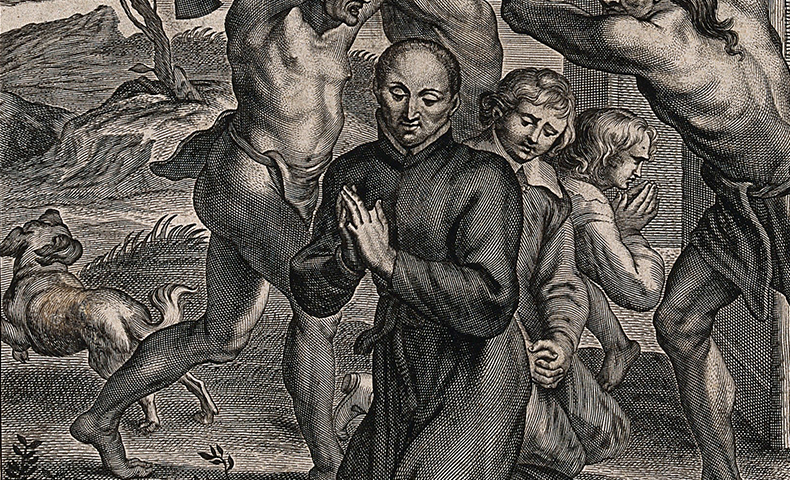 Today is the feast day of the North American martyrs: eight Jesuit missionaries who were martyred at different times in the mid-17th century in Canada. Chief among these were St. Isaac Jogues (1646) and St. Jean de Brébeuf (1649). They and their six fellow missionaries ministered among the Hurons in what is now southern Ontario and upstate New York.

Isaac Jogues was born in Orléans, France in 1607. In 1636 he was ordained a Jesuit priest and in that same year after hearing the stories of missionaries to the New World, set sail for New France to begin his work. When he arrived in Quebec he wrote to his mother: “I do not know [how] it is to enter Heaven, but this I know—that it would be difficult to experience in this world a joy more excessive and more overflowing than I felt in setting foot in the New World, and celebrating my first Mass on the day of Visitation.”

Jogues lived among the Huron for six years and acclimated himself to their diet and customs. Then he was captured by the Mohawk nation and thus began his trial by fire:

“…in retaliation for comforting a tortured Frenchman, the Mohawk beat Jogues with sticks, tore out his fingernails, then gnawed the ends of his fingers until finger bones were visible. The war party then took their captives on a journey to a Mohawk village. There, the villagers marched them through a gauntlet, which consisted of rows of Iroquois armed with rods and sticks beating the prisoners walking in single-file. Afterwards, the Iroquois forced Jogues and the prisoners onto an elevated platform where they were mocked. A captive Algonquin woman then cut off Jogues’ thumb. At night, the prisoners were tied spread-eagled in a cabin. Children threw burning coals onto their bodies. Three days later, Jogues and the prisoners were marched from one village to another, where the Iroquois flogged them in gauntlets, and jabbed sticks into their wounds and sores. At the third village, Jogues was hung from a wooden plank and nearly lost consciousness, until an Iroquois had pity on him and cut him free. Throughout his captivity, Jogues comforted, baptized, heard confession from, and absolved the other prisoners.” (Wikipedia)

With the help of a Dutch official, Jogues was able to escape and returned to France. Due to his tortures he could no longer celebrate the Mass as he was missing the fingers (thumb and forefinger) required to touch the the host. Pope Urban VIII called him a “living martyr” and gave him a dispensation to celebrate the Mass despite his missing digits. It would have been totally understandable if Isaac Jogues would have settled down in France and lived out the rest of his years in “retirement,” but he didn’t. After a visit to see his mother in Orléans, he prepared to return to New France to continue his work in the missions.

Within six months of arriving in Mohawk territory, Isaac Jogues was martyred by being beheaded with a tomahawk. Jogues often said, “He [Jesus] was making us share his sufferings, and admitting us to participation in his crosses.” Jogues regarded his torture, and the death he thought would follow, as allowing him to imitate, and thus participate in, the passion of Jesus (Allan Greer).

The life, ministry and death of Jogues and his fellow martyrs challenge each of us, causing us to ask just how deep is our faith and how strong is our desire to serve even in the face of death. These men lived their lives with an exclamation point!

St. Isaac Jogues and companions pray for us!