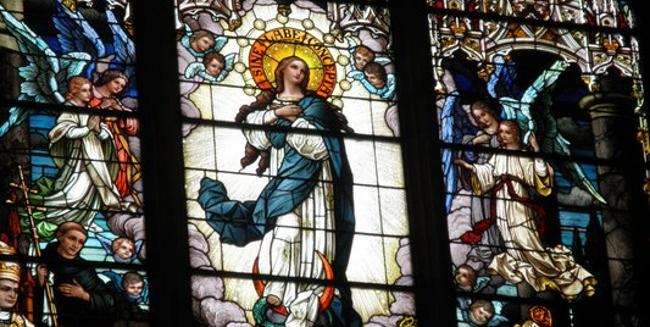 I just returned from Mass celebrating the Solemnity of the Immaculate Conception. It was wonderful to see the church completely full on this holy day of obligation. It was my privilege to be one of the lectors, reading from Genesis 3.

Coming from an evangelical heritage I understand the issues someone from that tradition may have with a day like today. Many point to the fact that it wasn’t until 1854 that Pope Pius IX declared the Immaculate Conception to be dogma in his encyclical Ineffabilis Deus, “We declare, pronounce, and define that the doctrine which holds that the most Blessed Virgin Mary, in the first instance of her conception, by a singular grace and privilege granted by Almighty God, in view of the merits of Jesus Christ, the Saviour of the human race, was preserved free from all stain of original sin, is a doctrine revealed by God and therefore to be believed firmly and constantly by all the faithful.”

This dogma did not come out of thin air. The Church through the centuries held this to be true, and then in defense of the divinity of Jesus Christ in the 19th century, the dogma was declared, not as something novel, but in accord with the time-honored beliefs of the Church, not to elevate Mary, but to glorify Jesus and his salvific work in and through his mother. Here is a sampling of what previous churchmen have said:

“Let us not imagine that we obscure the glory of the Son by the great praise we lavish on the Mother; for the more she is honored, the greater is the glory of her Son. There can be no doubt that whatever we say in praise of the Mother gives equal praise to the Son.”—St. Bernard of Clairvaux, 1090–1153.

Blessed Lady, sky and stars, earth and rivers, day and night—everything that is subject to the power or use of man—rejoice that through you they are in some sense restored to their lost beauty and are endowed with inexpressible new grace. All creatures were dead, as it were, useless for men or for the praise of God, who made them. The world, contrary to its true destiny, was corrupted and tainted by the acts of men who served idols. Now all creation has been restored to life and rejoices that it is controlled and given splendor by men who believe in God.

The universe rejoices with new and indefinable loveliness. Not only does it feel the unseen presence of God himself, its Creator, it sees him openly, working and making it holy. These great blessings spring from the blessed fruit of Mary’s womb.

Through the fullness of the grace that was given you, dead things rejoice in their freedom, and those in heaven are glad to be made new. Through the Son who was the glorious fruit of your virgin womb, just souls who died before his life-giving death rejoice as they are freed from captivity, and the angels are glad at the restoration of their shattered domain.

Lady, full and overflowing with grace, all creation receives new life from your abundance. Virgin, blessed above all creatures, through your blessing all creation is blessed, not only creation from its Creator, but the Creator himself has been blessed by creation.

To Mary God gave his only-begotten Son, whom he loved as himself. Through Mary God made himself a Son, not different but the same, by nature Son of God and Son of Mary. The whole universe was created by God, and God was born of Mary. God created all things, and Mary gave birth to God. The God who made all things gave himself form through Mary, and thus he made his own creation. He who could create all things from nothing would not remake his ruined creation without Mary.

Hail Mary, full of grace, the Lord is with thee.
Blessed art thou among women and blessed is the fruit of thy womb Jesus.
Holy Mary, Mother of God, pray for us sinners now and at the hour of our death.

I come from a long tradition of evangelical protestantism (four-plus generations), but I'm still wet behind the ears from my swim across the Tiber in 2016. I love our Lord and His Church, my wife of 41 years, my three children, and my ten grandchildren. View all posts by Caritas in Veritate