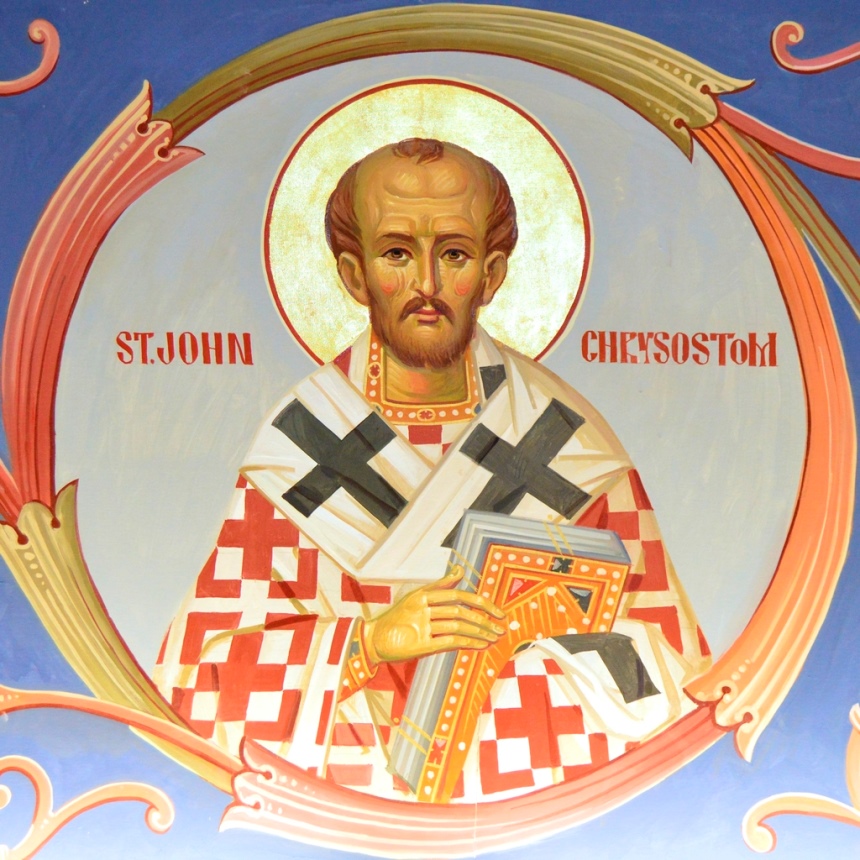 Today is the feast of St. John Chrysostom, the fourth-century bishop and doctor of the Church born in Antioch, Syria. He is also known as the greatest preacher ever heard in a Christian pulpit, hence the name Chrysostom, meaning “golden-mouthed” referring to his eloquence.

John spent his early years as a monk in the desert. There he abused his body with fasting and deprivation, finally forcing him to return to the city for the sake of his health. Even though his physical health suffered over the years, “his tongue was powerful. The content of his sermons, his exegesis of Scripture, were never without a point. Sometimes the point stung the high and mighty. Some sermons lasted up to two hours.” (Franciscan Media). It was not unusual for his listeners to break out in frequent and sustained applause when he preached!

He spoke to husbands and wives…
—”But if a man and a woman marry in order to be companions on the journey through earth to heaven, then their union will bring great joy to themselves and to others.”
—”The love of husband and wife is the force that welds society together. Men will take up arms and even sacrifice their lives for the sake of this love….when harmony prevails, the children are raised well, the household is kept in order, and neighbors, friends, and relatives praise the result. Great benefits, both of families and states, are thus produced. When it is otherwise, however, everything is thrown into confusion and turned upside-down.”

He spoke to the sanctity of human life…
—”To destroy the fetus ‘is something worse than murder.’ The one who does this ‘does not take away life that has already been born, but prevents it from being born.'”

He spoke to the religious of his day…
—”The road to Hell is paved with the bones of priests and monks, and the skulls of bishops are the lamp posts that light the path.”

Our good bishop did not hold back. He called a spade a spade. It sometimes got him into trouble. In fact, he died in exile in 407. His last words are said to be, “Glory be to God for all things.”

St. John Chrysostom pray for us!

I come from a long tradition of evangelical protestantism (four-plus generations), but I'm still wet behind the ears from my swim across the Tiber in 2016. I love our Lord and His Church, my wife of 43 years, my three children, and my eleven grandchildren. View all posts by Caritas in Veritate